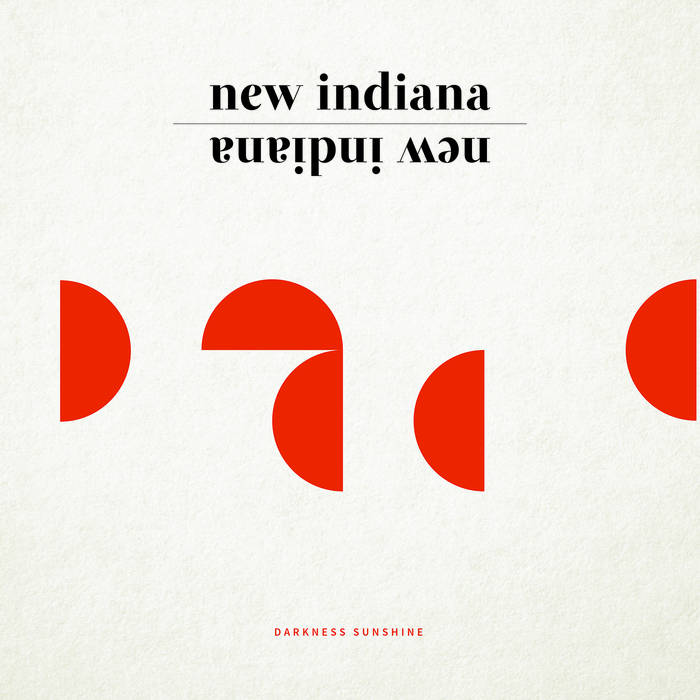 Since meeting in Tucson (at the University of Arizona) in 1999, guitarist Randy Bergida and cellist Topu Lyo have made a habit of recording their long talks. As their friendship deepened, the conversations took on an endless sprawl, much like the literal ground they’ve covered in almost 20 years of playing and criss-crossing North America together. Lyo and Bergida never expressly set out to do anything with the recordings, but when they started their duo New Indiana, subjects from forgotten discussions began to bubble up in their singular adaptation of traditional roots stylings/music? for acoustic guitar, cello, and vocals.

Rehearsed and demo’d mostly in a Brooklyn basement apartment during late night recording sessions, Darkness Sunshine derives its luminescence from the fact that Lyo and Bergida had to play very quietly to avoid disturbing the neighbors. No strangers to effects pedals and amplifiers in other projects, they opted to rely on natural resonance with New Indiana. But cranking their preamps gave the recordings a sheen they hadn’t expected, and the end result is an ambience that’s both intimate and immense, not unlike a whisper rising to the vaulted ceilings of a cathedral.

Where so many artists (with good reason) succumb to the allure of twang, on New Indiana’s debut Darkness Sunshine, Lyo and Bergida set off for... somewhere else. As far as anyone involved in the making of Darkness Sunshine knows, there’s no real-life place named New Indiana. But it’s not quite fair to say that it doesn’t exist. The album references myriad locales that spark the imagination: Montana, the Grand Canyon, the Pacific Coast, the Yucatàn “Pueblo Mágico” city of Mérida, etc. In some respects, then, Darkness Sunshine functions as a set of travelogue postcards.

Fair enough --- the pair has seen its share of tumbleweeds, deserts, mountains, ocean water, and open skies. (Lyo and Bergida also play as perhaps the world’s most unconventional wedding band, New York Ceremony Music.) But Darkness Sunshine also grapples with the discrepancies between the idea of one’s homeland as mythical fable, as conflicting idealized visions, and as bitter truth. Likewise, the music bears the contours of growth and tribulation that every close friendship, every community must inevitably weather --- understanding paid for with friction.

Randy Bergida and Topu Lyo have never recorded their more difficult exchanges, but Darkness Sunshine wouldn’t be what it is without them: a serene record whose healing light shines all the brighter against the shadows it casts.

Recorded, Mixed and Mastered by Warren Amerman at Rotary Records

Bandcamp Daily  your guide to the world of Bandcamp

Benji B talks about his new compilation ‘Deviation Classics’